Catching up with our sim bursary winners

In October 2020, the winners of the BWPA Motion Flight Simulator Bursaries were announced. A few weeks on, we have caught up with some of them to ask how their bursary has made a difference.

Sam C has already used her bursary and says she “loved every second of the experience”. She had hoped she would come away from the session feeling confident that she could still handle a jet after a break, even though it was a different aircraft type than she had previously trained on. It is fair to say that Sam’s aspirations were fulfilled!

Sam explained that the session was really relaxed and that her instructor Michael was fantastic, providing encouragement throughout. The sim session involved multiple approaches and exploring how to manage the aircraft during various scenarios that may be encountered in the real world. She left the session with a huge grin.

Sam says that she can’t recommend the team at Motion Flight enough and is so grateful to them, and to the BWPA, for the bursary.

Isabelle Jones has also recently completed her bursary at Motion Flight. She says that the session was super and the instructors were fantastic. Reflecting on the experience, Isabelle says that her bursary was not only the perfect opportunity to brush up on some skills but also a perfect opportunity to chat with others and feel more confident about what is to come. It has renewed Isabelle’s passion for flying and she cannot wait to properly start her career.

Overall, Isabelle says the best thing about the experience was that it gave her confidence, both in herself and in terms of her future career. She thanked Motion Flight and the BWPA for the opportunity. 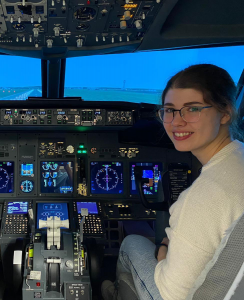 Izzy Fung has not yet used her bursary but she is very much looking forward to stepping back into a 737 cockpit, to remind her what she is working towards. When asked how she felt about being awarded the bursary, she summed it up perfectly by saying “Have you ever walked up a mountain and then realised that what you thought was the peak is actually a false summit? That was pretty much how I felt when I completed my commercial training in March and all piloting jobs started to withdraw. After months of uncertainty, the sim bursary came at a time where I was starting to wander off my flight path.”

Everyone in aviation can empathise with that feeling this year!

Izzy is looking forward to refreshing the Multi-Crew Cooperation (MCC)/ Jet Orientation Course (JOC) skills that she had previously learnt and also having the opportunity to meet like-minded people. She thanked Motion Flight for this opportunity and for the continuing support offered by the BWPA.