Ground-breaking paramotorist Sacha Dench has been awarded a BWPA accolade for her record-breaking solo 7,000 km trip highlighting the plight of the endangered Bewick’s swan.

Sacha was awarded the Jean Lennox Bird Pendant, the BWPA’s senior award reserved for women pilots consistently achieving goals, showing diligence to duties and encouragement to others at a special ceremony in London Wetland Centre.

Sacha’s marathon journey began in the swans’ breeding grounds in Arctic Russia and ended where they winter at WWT’s reserve in Slimbridge, Gloucestershire, three months later.

Her valiant efforts also caught the attention of the Royal Aero Club, who awarded her the prestigious Britannia Trophy, previously given to Richard Branson and the Red Arrows.

WWT Conservationist Sacha said: “I’m pinching myself! I am honoured to be recognised by an institution regarded as highly as the BWPA as we approach International Women’s Day.

“The BWPA was set up in the fifties when the fairer sex was expected to stay at home. It exists to support women who fly or who are learning to fly and their members have provided me with endless support since the early days when the Bewick’s mission was no more than a daydream.

“This is for all the unbelievable women who helped and all the men who believed that a woman could do this.”

Julie Westhorp, Chair at BWPA, said: “Sacha achieved an amazing feat of planning, logistics, aviation, navigation and endurance, flying 7,000km through 11 countries while becoming the first woman to cross the English Channel by paramotor. Sacha is a worthy winner.

“A previous winner of this award, over 50 years ago, was BWPA stalwart Sheila Scott, who was also one of the few women to receive the Britannia Trophy.

“We continue to encourage and support women everywhere who want to fly and we commend Sacha for her achievements in aviation and showing everyone what we are capable of.”

The 42-year-old began paramotoring after joining WWT in 2009 following a terrifying plane flight through a severe thunderstorm in Panama which left her afraid of flying.

Surrounded by birds in flight at WWT’s headquarters in Gloucestershire, Sacha vowed to beat her phobia and threw herself into her new hobby. She eventually gained enough confidence to fly the path of the Bewick’s swans’ migratory route to raise awareness of the bird’s decline. 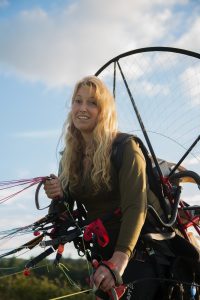