It wasn’t the most ladylike way to get into an aeroplane, and it illustrated beyond reasonable doubt that the designer did not have the average female in mind! Veronica was the first to climb into the Gladiator. Then I had a go, but by the time it came to Amy’s turn (see photo), she positively shinned up the side of the aircraft and was in it in a flash. Roger Bailey, Shuttleworth display pilot and our speaker at the AGM two years ago, was giving us a close up look at some of the Shuttleworth aircraft, after our picnic and an excellent flying display. He had fascinating stories to tell about the history of the aircraft, and first hand knowledge of their flying idiosyncrasies. It was a brilliant end to a good day and another well supported event.

Many thanks to Roger for his time and for giving us an unforgettable afternoon, and to Lesley Roff for organising an event which she ended up unable to attend herself as she was in hospital. 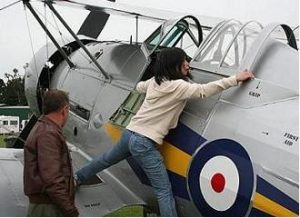