Romney Foord, one of our Free Trial Flight competition winners, tells all…

First of all, I have to own up to the fact that this was not my first air experience! I have been involved with aviation for quite a few years but have never got my act together to do anything about getting my PPL and I thought that by undertaking a “proper” lesson, the instructor could at least assess if I had any potential or just wasting my time!

Back to my prize – I didn’t think for one moment that I had won so patience not being my strongest point, I enrolled for a few lessons at a local flying school so that they could tell me if my flying was pants or if it was worth me trying to qualify, so I had just started my PPL when the prize was announced – yippee I thought – more flying and in something different.

At present I am learning on a Robin DR400 so he aircraft I was offered for my prize by the FlyingHut a DA40, all singing, all dancing version – it had only one thing in common with what I am used to – a stick and wings! I was sitting in the cockpit like someone who had escaped from an institution – mouth open – wow, oh really and so on!! Everything is so modern in 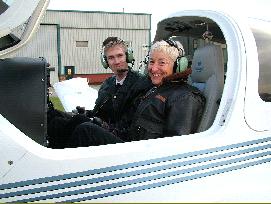 comparison to my training aircraft – in fact it was not unlike the Star Ship Enterprise. No power checks on this baby, the computers sort all that out, no mags, no carb heat, no mixture button, electric flaps, variable prop, but that automatic too – and she runs on A1 Jet Fuel – very economical – she can go from Shoreham to France and back for about a tenner! My biggest problem was the fact I could not taxi her – front wheel is a castor and even with the peddles brought right up close, my feet were too small to be able to hit the brakes at the top of the peddles and keep my heels on the floor – even with the best will in the world it was not possible – you hum it (instructor operating steering with sensible size feet) and I’ll play it (me doing the twiddley bits) The Sat Nav was awesome as was the auto pilot (she flew it much better than me) the power took some getting used to, flying by percentage power rather than RPM, the throttle was so sensitive that it just needed the gentlest touch when making adjustments. I took off from Shoreham, it was pretty windy but luckily just within limits for the aircraft, had to make sure I didn’t get too near clouds – icing reported at 2000ft, not good on a fibreglass airframe. We tracked along the coast to Seaford – found my house – made myself known to him indoors and then continued back along the cliffs to Eastbourne. We also put the DA40 through her paces – she pulls G when encouraged! She was very comfortable to fly, even plush grey leather bucket seats. I would say the DA40 is a positive and responsive aircraft and once you get used to all the modern gadgetry, even electronic reminders to do FREDA checks and what I thought was a stall warner is in fact an annoying bleeper to tell you that you have gained or lost height, even when you were intending to!

When we returned to Shoreham, I took the aircraft into the circuit and lined her up on finals at this point I handed her over to my instructor as he had warned me she is a bit of a minx to land – just a bit, glad he had her and not me.

Thanks BWPA and The Flying Hut for affording me the opportunity to fly this very nice, very modern aircraft and a very big thanks to Simon, my instructor for making it a really enjoyable flight – another one hits the Log Book.