When the European Union Aviation Safety Agency (EASA) was developing the overarching regulations for aviation in Europe, they added a rule which stated that ‘all aircraft must land into wind’. It took a face-to-face meeting with the Director General at the time to convince the Agency that this is an impossible task for balloons!

Balloons are the oldest form of flight. They take off, fly and land with the wind. The perception that many people have is that balloons cannot be steered, that they are hard to control and that balloonists are just ‘floating’ somewhat aimlessly in the sky.

But this is not really true: balloons can be steered quite accurately, but only if there are different winds in different altitude layers. By choosing the most favourable directions and speeds in those wind layers, the pilot can indeed ‘navigate’ the balloon to a pre-defined landing spot. 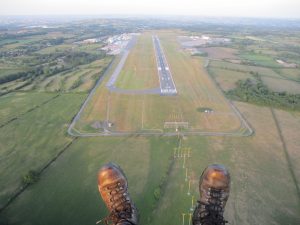 In the Alps, or with certain mostly winter-associated weather and wind conditions, balloons can ‘fly the box’. This means using an upper wind that heads in one direction and coming back to the launch site with a lower wind that flows 180 degrees in the opposite direction. Or, to take it to extremes, you could use the jet stream at high altitude. This is what the Russian record holder Fedor Konyukhov did when he passed his original take-off site in Western Australia within metres, having orbited the world (20,506 miles) in 11 days in a hybrid hot air helium balloon, reaching wind speeds of more than 150kts!

Choosing the best launch site is challenging for balloonists, as weather forecasts are not always 100% accurate, even with the best technology. Varying terrain such as forests, rivers, the sea, valleys and mountains, and other obstacles also have a huge impact on wind changes. This is especially true around the Bristol Channel, where I fly; often a gradient easterly wind conflicts with a sudden developing howling sea breeze. And let us not forget the quickly-rising temperatures on a frosty morning as the sun warms the air and land.

It is therefore a common ballooning rule never to say to the ground crew “I will land there”, even when only a few metres away from the target. Winds can suddenly change right at the last second and there is nothing one can do about it.  Accepting that the weather is beyond our human control and that it is to be respected in all forms is something that every balloon pilot has to learn.

Ballooning is probably one of the most weather and wind dependent forms of flight, and it can be extremely frustrating to see aeroplanes and helicopters taking off but being grounded ourselves due to unfavourable winds.  At least there usually is a pub nearby….

But ballooning can also give you one of the most rewarding experiences in life when you are gently lifted up into the sky in an open wicker basket and the balloon drifts along in this wonderful element that we call ‘wind’!