· In partnership with British Women Pilots Association, easyJet will underwrite the funding for six female recruits through the initiative.

easyJet, Europe’s leading airline, today launched an initiative to help encourage more women to train for a career as a commercial airline pilot. The easyJet Amy Johnson Flying Initiative, named after the UK’s most well-known and inspirational female pilot, was launched by the Transport Secretary Patrick McLoughlin alongside the Government’s new Transport Skills Strategy, which aims to attract more women to roles in transport.

Currently women make up six per cent of easyJet’s new pilot intake and the airline plans to double this to 12% over the next two years. The airline will encourage female pilots at all ranks and positions by widening the pipeline of young women who enter easyJet’s pilot community.

The launch of the easyJet Amy Johnson Flying Initiative, in partnership with the British Women Pilots Association, is one of the first parts of a long term strategy to increase female pilots with six female, new entrant pilots having their training loan of around £100,000 underwritten by easyJet.

Amy Johnson was the first woman to fly solo to Australia in 1930. Originally from Hull, she gained her pilots license in 1929 at the London Aero Club. This year is the 75th anniversary of her death, whilst flying over the Thames Estuary for the Air Transport Auxiliary in 1941 during the Second World War.

“At easyJet we are committed to encouraging more women to consider a career as a pilot and the easyJet Amy Johnson Flying Initiative is one important way of enabling some women, who may not have been able to consider it before, to undertake training and start what is a very rewarding career for life.”

“Our new Transport Infrastructure Skills Strategy sets tough new targets designed to get more women into the industry. I’m delighted to see easyJet taking a lead with the Amy Johnson Flying initiative and would like to see more companies coming up with innovative ways to encourage more women to consider a career in transport.”

“The BWPA partnership with easyJet in the launch of the Amy Johnson Flying Initiative represents a step change in the promotion of flying careers to women.  We believe this will make a real difference in supporting the entry of more young women onto a career path where a significant barrier to entry has been financial, not aptitude. The BWPA supports easyJet’s aim to recruit the best of the best to sustain the high standards in the industry. The BWPA has every confidence that this initiative will be a success and we sincerely hope that it will become best practice in the industry a whole.”

“On behalf of the family, this is a wonderful opportunity being offered to today’s women and we know Amy would have been delighted.”

Other easyJet activity to increase the number of female pilots will include:

· Working with easyJet’s pilot training providers to attract more women to apply for the cadet programme.

·Work in partnership with organisations which promote female take-up of STEM (science, technology, engineering and maths) subjects and women in business, which could include funding sources for the easyJet project.

· Highlighting the opportunities of pilot careers to young, female audiences such as school groups and other young organisations by deploying current easyJet female pilots to speak about their careers.

easyJet has also committed to provide additional support to develop and retain female pilots, so that more of them can go on to achieve captaincy and pilot management roles. To achieve this easyJet will:

· Introduce loan guarantees for A320 type ratings for female pilots entering from other airlines.

· Develop female captains so they can take on leadership roles such as training and base management roles.

easyJet aims to be an employer that attracts and retains the best people, values and promotes diversity, and seeks to support and develop its employees by providing on the job learning experiences.

The airline has an established pilot cadet programme, in partnership with CTC Aviation and CAE Oxford Aviation Academy, to train people for their first full-time flying role. In 2014/15 223 cadets completed their training with these providers and are now flying with easyJet.

easyJet will recruit 1,140 crew in this financial year with a split of approximately 830 cabin crew and 310 pilots. The airline will also promote 200 Cabin Crew to Cabin Managers and 140 Co-Pilots to Captains.

Last year easyJet opened a new £2.7 million training academy at Gatwick airport to provide 60% of easyJet’s training for crew from across Europe, with the remainder being delivered at easyJet’s existing training facility in Luton.

The British Women Pilots’ Association (BWPA) has for over sixty years promoted flying as a career to young women and supported the award of scholarships and bursaries, in addition to outreach programmes going into schools and colleges. 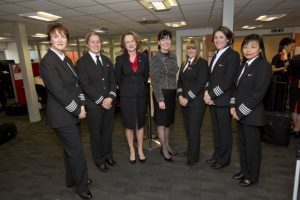