Body Flying in a Wind Tunnel

The event started in true BWPA fashion with a magnificent pub lunch at the Queens Hotel. The bangers and mash seemed to be the speciality of the house and was welcome after sampling the delights of the M1.

After lunch we headed in convoy to Bodyflight where, after climbing stairs to the third floor (who said no heights were involved), we checked in at reception and each signed the usual disclaimer concerning injury, insanity etc. While waiting for everyone to fill in the forms, we were able to watch the video of one of the display teams practice session which was fascinating to see how fast they changed formation and in such a small space!

Our instructor for the day, Jay, then took us into a briefing room where he explained the afternoon’s itinerary. He then left us watching an information video and was bemused on return to find us howling with laughter, we had just got to the bit in the film where we were to assume this “challenging” body position, then relax and smile! Some of us were then invited to practice this body position on what looked like an elongated bar stool to much encouraging applause. We then had to learn hand signals for bend legs, straighten legs, arch back, head up and relax as the wind tunnel is very noisy and we would be wearing earplugs.

After moving to the kitting area we were issued with flight suits, helmets, goggles and earplugs. Our names were displayed on a screen so we could get into our flying order, and after a quick kit inspection we filed into the tunnel to await our turn.

The actual flying was just like the real thing but without the initial feeling of acceleration as you leave the aircraft. Staying on station in the tunnel was quite difficult and I spent some time flying into the sides of the tunnel until our trusty instructor grabbed a leg to pull me back into the middle.

Each flight was 1 minute and 15 seconds which flashed by, just as you think you’ve got the hang of it, it’s time to leave the tunnel. We all had 2 flights each after which Jay then showed us how it should be done with a short freestyle display including shooting vertically to the top of the tunnel (which is certainly something you can’t do having jumped out of an aircraft!)

We then peeled our kit off and retired to the café for a much needed cup of tea. Exhausted but with a feeling of achievement, most of us agreed we just have to do this again sometime! 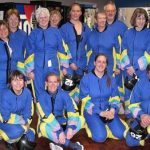 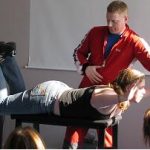