Why did you learn to fly? Was it, like me, for the aerial views – to experience and explore beautiful landscapes? If so, why not take part in the Chairwoman’s Challenge of 2007? This annual competition will help you to learn about interesting places, and will give you two hours flying over them. As an enthusiastic competitor, I hope through this article to encourage both experienced and new pilots to have a shot at the Challenge in 2007.

Between 2003 and 2006, I have entered, and thoroughly enjoyed, four Challenges. In 2003, as an inexperienced and nervous pilot, I found planning the two-hour Challenge flight both difficult and daunting. The theme was “Food and Drink”. I work in Leicester, so I decided to investigate local cheeses, devising a route over farms and dairies that also included factories making crisps, pork pies, beer and pickles. But the route seemed haphazard. By moving it south-west, I could fly a “Cheese Triangle” from Gloucester to Gloucester (Double Gloucester) via Caerphilly and Cheddar. This proved a better framework for a route, and included a multitude of food-producing farms, vineyards, and orchards.

My route was now fixed. I had three sorts of planning to do. Firstly, I had to prepare as much of my flight plan as possible, and put it in my flight bag with relevant maps, ready for a day when conditions were right to fly. Secondly, I used libraries and the internet to gather as much information on the topic as possible. Finally, I had to prepare myself. In 2003, I lacked confidence. I had never flown into Gloucester nor visited much of the planned route. Before the Challenge, I flew solo to Gloucester to learn the circuit patterns and airport layout.

Again, in 2004, having planned a circular route from Nottingham to visit sites associated with Dolly Shepherd, the Victorian Balloonist, I flew there solo in preparation. I also flew the whole route from Coventry, as I was worried about making mistakes near East Midlands and Birmingham Airports. By 2005, I was becoming more confident, and I have flown the last two rallies without prior flying preparation

I have always flown with a passenger as navigator and photographer; either my husband, who is a pilot, or my daughter, who is not, and who conquered a real fear of flying to come with me. But you could fly solo, or with friends, or take someone who is impatient to find out what flying is like. A 15 year old friend is already demanding that I take her with me next time.

All four Challenges have been immensely enjoyable. There is the planning, using dark winter evenings to prepare a summer adventure, the floor covered in maps and guides. Then comes the execution, seeing familiar and new places from a different vantage point. And finally there is the writing-up, with a hectic three weeks spent putting together a log from notes and photos. 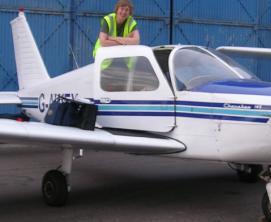 So why complete the Chairwoman’s Challenge? Because, as I hope I have shown, it is fun, and because it is a challenge. It engages you fully both intellectually and practically as you prepare, fly, and record your flight. However, the task is easy enough for any PPL or student pilot to take on, and short enough not to be overtiring or outrageously expensive. Completing a Challenge should give you confidence, and lead to further challenges as you progress in your career. Certainly, it has given me the confidence to fly further and to attempt more. In 2004, I flew solo return from Coventry to Roanne, Nuneaton’s twin town near Lyons. In 2006, I entered my flying club’s triangular long distance competition, flying solo Coventry – Shoreham – Exeter – Coventry, a distance nobody has yet beaten. And last July, the experience of the Chairwoman’s Challenge led a friend and me to complete the international 8-hours-plus “Dawn to Dusk” competition, the structure and rules of which mirror those of the Chairwoman’s Challenge, except that competitors choose their own themes. Ours was “The Life and works of Isambard Kingdom Brunel”, a theme that allowed us to fly from Coventry to Essex via Cornwall; giving a long day of flying over the most wonderful landscapes and structures, that was absolutely AMAZING!!!