Daphne Poynter, one of the long-term members of the BWPA, passed away at her residential home in Stevenage on Wednesday 13 May 2020. Daphne was a loyal BWPA member since joining in 1957, two years after the Association was founded.

Daphne was typical of her ‘vintage’, growing up in wartime London. She was very proud of her association with Godolphin and Latymer School, Hammersmith, where she was educated from 1937 to 1940, until her family were bombed out and she had to change schools. She graduated from the University of London with a BSc in 1945 and was employed as a scientist at Imperial College London, working in spectrographic analysis. She subsequently worked for the General Electric Company, the British Non-Ferrous Metals Research Association and was a Senior Scientific Officer working at the Warren Spring Laboratory in Stevenage before retiring.

Daphne’s hobbies and interests were just as interesting as her employment. She started gliding while at Imperial College London with the University’s gliding club. She served for many years as a reservist officer in the Women’s Royal Naval Reserve, making sure that her annual training got her to air bases such as Royal Naval Air Station Yeovilton which permitted opportunities to glide, sail and fly. She was also involved with the Guiding movement. 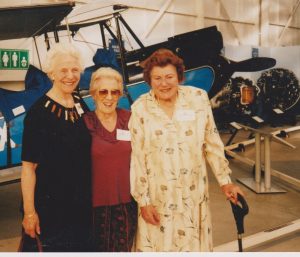 Daphne was an avid and committed aviator who generously shared her experiences. The BWPA was established as women like her were resuming civilian flying after World War II, and she joined at the same time as many other well-known names in women’s aviation including Freydis Sharland. As a scientist, as well as fellow reservist, she worked well with BWPA founding member Dorothy Cheesley, whose obituary she wrote in 2013. In particular, Daphne was experienced enough to be a Corps Pilot for the Women’s Junior Air Corps, Girls’ Venture Corps (GVC) after 1964. She flew thousands of cadets and she logged plenty of hours in the Corps-owned aircraft, alongside other important aviatrixes such as Jean Lennox-Bird, Elizabeth Overbury, Gwen Bennett and many other significant BWPA members. There must be many women still echoing the comments of one former cadet, that Daphne was looked up to as a sky queen arriving with the aircraft, then flying the cadets all day – what an example and an early version of STEM.

Daphne had great eye for detail, which is how many still remember her. She served on the BWPA committee, and her record-keeping and research was meticulous. She was a regular at AGMs and BWPA events until lack of mobility got the better of her. She was also a long-term member of the Amy Johnson Trust. Up until her death, Daphne was always ‘on the case’ and she will be missed as a key member of our Association.

Daphne’s cremation will be held on Wednesday 10 June. As this cannot be widely attended due to the current pandemic, we suggest that anyone who would like to remember this redoubtable flying example light a candle for Daphne on the day. 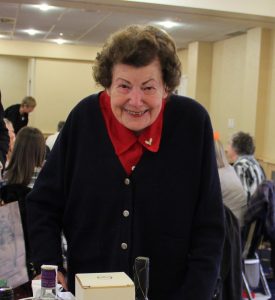 Daphne at the BWPA’s 2014 AGM and Christmas Lunch