65 years of the BWPA

This year marks the 65th anniversary of the founding of the BWPA.

Civil aviation all but ceased when World War II started in 1939, with most serviceable small private aircraft being requisitioned. When the war ended, the country was destitute and there were few aviation opportunities available.

Following their work for the Air Transport Auxiliary (ATA), female pilots like Eleanor Wadsworth, Mary Ellis, Lettice Curtis and Joy Lofthouse were thanked for services to their country; however, like most people at the time, they were unable to continue pursuing flying either recreationally or as a career. Many of these women sought aviation opportunities with the RAF Reserve squadrons or the Women’s Junior Air Corps (WJAC).

The Women’s Engineering Society (WES) was the only membership organisation available for female pilots. However, with the support of WES, in 1955 it was decided to create a separate group to focus specifically on aviation experiences.

The inaugural meeting of the BWPA was held on Friday 11 March 1955, at 2 Whitehall Court, London, SW1, with the stated ambition to be an ‘active organisation and have the enthusiastic support of all women pilots’. A total of 30 women attended, including eight from WES. Several attendees were also former ATA pilots. A copy of the minutes from the inaugural BWPA meeting are available to view.

Freydis Sharland (nee Leaf), who was one of the first women to qualify as an RAF pilot and was the 1954 British Air Racing Champion, was a natural choice as the first BWPA chairwoman. 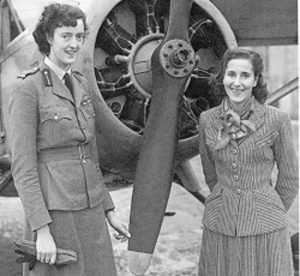 By the end of 1955, the BWPA had grown to 70 members. Within three years of its founding, membership was closer to 100 female pilots both from the UK and overseas.

65 years later, and the BWPA still endeavours to raise aspirations and awareness of opportunities for women in aviation, both as a career and as a recreational activity.