D-Day with the Veterans

I would hardly have imagined that I would take part in a historic re-enactment of what was – and still is – the largest land/air/sea invasion to liberate Europe from the grip of Nazi Germany! And there I am: a German by birth but now part of the British ‘invasion’ fleet of 23 Daks, Harvards, Mustangs and two Beech 18s flying in close formation towards the English coast and out over the Channel to Normandy.

With the weather preventing much activity in the lead up, Wednesday 5 June dawned much brighter. The air show was in full swing with over ten thousand visitors streaming through the gates at Duxford. Having been invited to act as a camera-ship for the air display and the flight across to Normandy we were asked to take two veterans for a sortie over the airfield. I found myself sitting next to veteran Harry Read and John Corbett. Harry (93) once fought with the Royal Corps of Signals (so had Phil’s dad during WW2 in Burma) and John (83) was with the Guards Parachute Corps. It was their first time in a Beech 18 – and for me a first experience of flying in formation with other Dakotas. Twenty-three of those lovely ‘old ladies’ had flown into Duxford and displayed their graceful beauty in the skies over Cambridgeshire. What a magical sight! 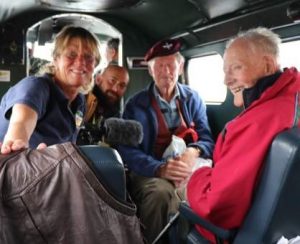 After a 45 minute display and with my stomach getting increasingly queasy we finally touched down with crowds cheering and waving. It was very emotional.

After a short lunch break we were getting ready for the big moment: our flight in formation with all the Daks to Normandy. But juggling of Heads of State movements and some other issues delayed our departure by two precious hours. Meanwhile an impressive formation of five US Marines MC-130s and six Ospreys made a pass on their way from Lakenheath to Portsmouth to look after Mr Trump.

The atmosphere among the many thousands of visitors and aviators was electric as the 11 closely-grouped aircraft droned by. After a spectacular climb-out we routed via Chelmsford, home of 16 Air Assault Brigade, and passed overhead Southend Airport and Eastbourne. Harvards provided an escort, two Mustangs gave ‘top cover’, and our Beech plus Nick Houghton’s similar craft were off the left flank with journalists to record it all for posterity. We had nearly 30 aircraft in the stream.

There was no time to sit back and relax. Instead I was jumping up and down, turning right and left in the back of our aircraft assuming my role as ‘video-photographer’. Constantly not only juggling different equipment which ranged from my Canon EOS 80 to my iPad, iPhone and a GoPro but also nearly hanging out of our open ‘exit window’ in order not to miss THE shot or recording – it was unbelievably exciting and exhausting. 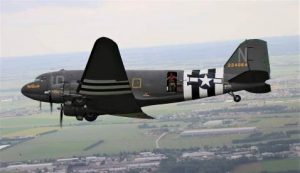 After around 45 minutes the unmistakable skyline of London’s city appeared to our west as we crossed the Thames Estuary near Sheerness. Then the coastline with its iconic white cliffs where hundreds of people had patiently waited for us to arrive.

We now set course for an increasingly grey French coast as we cruised over the waters of the Channel. It must have been a spectacular sight from all those boats, but thinking back of the real D-Day 75 years ago what a sight must it have been with thousands of ships underneath the hundreds of aircraft!

Passing abeam Le Havre we came into close formation with the rest of the Daks as we approached the Drop Zone for the parachutists. But for a while nothing happened. Strange. Sitting in the back with no head-set to hear what was going on in the front with ATC and other communication, I was left to guess and wait patiently holding my camera in tight grip not to miss the shot of the jump!

Finally the moment came – the doors opened and dozens of parachutes fell out like flower seeds quickly being dispersed by the wind and falling gently to the ground. Zooming in I could see the khaki colour of their special parachutes – a perfect disguise against the green fields of Normandy. The notorious Pegasus Bridge, where the first assault gliders had landed on D-Day, was jammed with people and vehicles, many in period uniform and on contemporary motor-bikes. Two (or even three) passes later the jumpers were all ‘out’ and the Dakotas recovered to nearby Caen (Carpiquet) airport. The double line of these venerable aeroplanes, more than half of which had crossed the Atlantic to take part, was impressive on the grass taxiway. 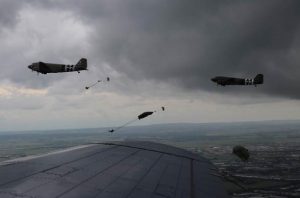 Representative aircraft from USA, UK, France, Denmark, Finland, Sweden (neutral at the time) and Hungary joined the festivities. Sadly, the Norwegian example suffered technical setbacks and had to remain at Duxford. Our Beech was the last to land and kindly given a priority spot right next to President Macron’s two VIP Falcons and a line of police helicopters.

Climbing out of the Beech I was quite shaken. The flight had been so emotional and exhilarating but also at times a bit frightening as we came close in formation with other aircraft and I never knew what was to come next. This certainly had been one of the most memorable flights I have experienced in our faithful ‘Betty the Beech’. After refuelling we had to rush off to make way for more VIPs. Perfect! We departed into a beautiful sunset and headed back towards the UK. Having had no time to re-fit our exit window, it was freezing cold in the back cabin. But who cares? Thinking back of what those soldiers and civilians had to endure during those incredibly hard days made me feel extremely grateful for the peace I had enjoyed in my life. Let us hope it stays and may this day be a reminder of the horrors of war and the precious gift of peace. 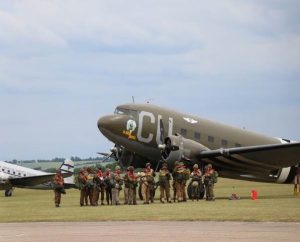