It was the 75th anniversary of the Piper Cub at Oshkosh, Wisconsin, U.S.A. (Wittman Regional Airport for the rest of the year), and as owners of this lovely little type of aircraft, I thought it would make a very special birthday treat. Whatever you may or may not heard about this huge aviation event – it actually blows you away when you visit it. It is aptly called the world’s largest aviation event, and there is acres and acres of everything aviation you can think of.
William and I flew to Chicago on one of Ian Allan Aviation Tours,  everything was organised to get us to Appleton where we stayed and were transported by Yellow School Bus every day to this spectacular event.  We had a really great tour guide, Andy Geary-Stephens, who kept us well informed of events. It was extremely hot (100 degrees f most days) but there was no lack of shelter and loads of water stations and lots of eating places with all sorts of menu options, and whenever you stopped by one of these there were numerous like minded aviation enthusiasts from all over the world sharing your table. We met a 91 year old American John Johnston from North Carolina, who had been stationed in Norfolk, England, during the war and flew bombers. He was so happy and full of life, and had been part of the inspiration of inventing duct tape!

Every day a free newspaper crammed full of details of classes, exhibitions, flying displays etc could be picked up from our hotel, or on the site itself.  It also contained pictures of the previous days events, so if you actually missed anything you could read up about it. Between eight and ten thousand visiting aircraft came to this event from all over the world, and there are two very long runways which had formations of Bonanzas, RV’s and Cubs landing with such precision.   Large groups of certain types all parked up in regimented lines and quite a few people camped under their planes wings at night. (There was a large area for buying your provisions if you camped out).  As this was their 75th anniversary, the Cubs created a spectacular field of gold , there were masses of them.  (Aviation is much more relaxed in the USA,  plus they have a vast land area to use). If your legs started to ache, you just jumped on a tractor drawn 40 seater open shuttle vehicle and got around. You could get on golf buggies, or even mobility chairs, and there was a special park outside for motor bikes, one couple had been visiting for years on their Harley Davidson bike, and she was 92 and he was 94! Everyone was so enthusiastic about the event, and an army of litter pickers never let the place get cluttered with debris, very important when the wind blew and so many planes were moving around.  The voluntary helpers of all ages were great and letting you know where to go when you needed to get somewhere special in time.
There was an aviation flea market which sold spares, parts, nuts, bolts, fabric, leather and stickers etc., needless to say we can always find something in a place like this and we ended up buying an extra holdall to carry it all back. Yes, the customs did open it,  and it was OK to transport special tie downs  and cables back with us to the UK. The schools in America really encourage all things about aviation, air traffic controllers, engineers, pilots and cabin crews etc., Kansas State University had really enthusiastic students talking to us about their ‘flying’ education. The Universities were well represented and informative about scholarships etc., and the schools in the States have sponsorship from various companies and people to enable young students to actually put back together old planes, so they learn about re-covering with fabrics or metals, riveting etc before doing avionics. They are then allowed to fly these planes with a qualified pilot when finished. These youngsters of 14years plus were a delight to talk to about their particular projects. 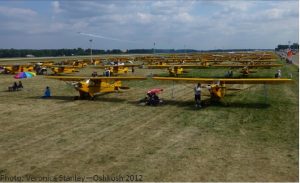 We also met no end of female pilots on various stands and in the exhibition halls. Despite the amount of pilots over in America, there are only 6% female, (only 3% airline pilots) much the same as it is over here. The Ninety-nines (motto – inspiring women pilots since 1929) had a tent for promoting advancement of aviation through education, scholarships and mutual support.  We met Lynda Meeks, the founder of Girls with Wings which is a volunteer organisation that relies on actual involvement of many people to make dreams take flight. Lynda felt there were lots of promotions etc. for boys and men but nothing for girls and her nieces inspired her to start this organisation. They sell the most amazing clothes and aviation inspired goodies for little girls in order to raise funds,

The workshops were amazing too. You could learn how to put a new cover on your plane, learn to spray paint safely and accurately, and there were no end of engineering and technical workshops held every day. There were around 800 exhibitors in 5 huge halls.   All the large manufacturers were present showing off their latest merchandise and products.
One morning we went off to the Pioneer Air Museum which was not to be missed.  The exhibits were pristine and the films showing all sorts of intrepid, daring flights in aviation were scary.  Amongst the aircraft were replicas of some very ancient aircraft, that looked fragile to say the least. We also took the bus down to Lake Winnebago to view the large collection of float planes gently bobbing up and down, and when they took off it was like watching majestic swans take flight.

We avidly watched the air shows every afternoon and the recreation of the Pearl Harbour attack by the Japanese war planes was terrific. Pyrotechnics were used that would never be allowed over here. This event was called TORA TORA and the Mustangs flew so close to the Japanese Zeros, amidst all the explosions which were massive. We were amazed no one actually collided.   The Canadian Sky Hawks parachute teamj were amazingly precise , 8 in total whizzing through the sky in formation. Every afternoon after their shows, all the Americans, including small children would stand to attention for their National Anthem which was played all over the area, and out of the sky a person would drop to earth holding an enormous flag with the Stars and Stripes. It was a very moving site, particularly on the day they commemorated the Veterans. The Tuskegee Airmen, African/American pilots overcame discrimination at home and abroad to post a superior flying record in Europe, gave lectures and offered free flights to black boys and girls to encourage them to fly.

There was an abundance of pleasure flights, in all sorts of aircraft, even a B17 Flying Fortress or a Bell 47 helicopter and a Ford Tri Motor.  Also the Goodyear Blimp took folks up for a flight several times a day. The Oshkosh control tower did a magnificent job sorting out all the aircraft, (the many controllers could be spotted in their PINK polo shirts), and on the tower it displayed moving letters to announce it was the busiest control tower in the world, this was easy to believe.

The Orbis  Flying Eye hospital plane, a MacDonald Douglas DC10,  all manned by voluntary doctors, opthalmists and anaesthetists hospital plane was another wonderful idea. It even had a full operating theatre on board, and did operations in many third world countries. There are numerous planes doing this and all the pilots are voluntary  Fed-Ex  pilots.
Lots of aerobatic teams from all over the world arrived to participate in this huge event, and every night there was musical entertainment at the Theatre in the Woods and on the very last evening, a huge firework spectacular took place with airplanes flying above dressed with LED lights and flares, all well lit up for the event. We went on a private visit to see the Basler Turbo Conversions, where Daks are converted to gunships and modern freighters – all of which seemed very time consuming until you viewed the way it was all finally finished.  Expensive? Yes very.

We met up with a lovely American couple (JD and Emily) who had stayed at our bed and breakfast only a few weeks before the event, and  JD allowed William to sit in Glacier Girl, an honour indeed. JD was the chief engineer for Rod Lewis, a very wealthy man who has accumulated a collection of war planes, which he has named Warbird Legends based in San Antonia,  including the Glacier Girl a P32 Lightning, which was literally buried under the ice for 40 years. This took an enormous amount of engineering skills and patience to retrieve from the depth of 268 feet under the ice.   Not to mention the cost. The plane is a superb example and we watched it fly  in a display. On our return trip to Chicago we stopped by the airfield at Pont du Lac only to see JD and his engineers fly in on their return to Texas. They had an oil leak in one of the planes and had to make a quick stop to sort it out.
When we finally returned to England, we were well tanned and exhausted by the week of full on activities, miles of walking, and seeing all the planes at Oshkosh, but we would not have missed it for anything.