How the A400M provides vital support during the coronavirus pandemic

The 70 Squadron Airbus A400M fleet at RAF Brize Norton is supporting the fight against COVID-19 by transporting patients and supplies. 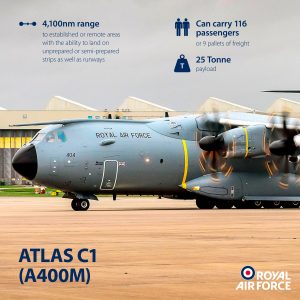 In 2018, the A400M was certified as capable of being used for aeromedical evacuation of high-dependency and highly infectious patients. It can be configured to become an airborne intensive care unit for up to four stretcher-bound patients – the metal plates, or ‘toes’, on the bottom of the ramp door mean that patients can be wheeled up onto the aircraft with ease. This medevac role, allowing the medical team to treat the patient in flight, is referred to as ‘CCAST’ – Critical Care Air Support Team. 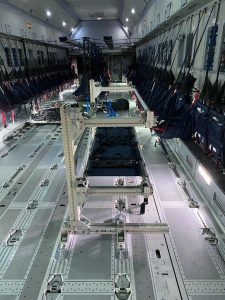 In the last few weeks there have been multiple phone calls to deploy a 70 Sqn aircraft to transfer patients to hospitals, mostly from remote locations. The A400M is well suited to these tasks as it can land on semi-prepared or unprepared areas, even beaches and short runways such as those found on small islands. For example, on 22 March an A400M was deployed to transfer a COVID-19 patient from the Shetland Islands to an Intensive Care Unit in Aberdeen. Of course, the aircraft have a specialist in-depth clean after every flight transporting suspected COVID-19 cases. 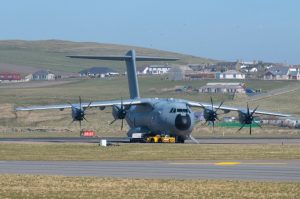 A400M in the Shetlands. Credit: RAF

At 3:23 on 4 April, while in charge of the night shift, I received a call to launch the National Standby (NS) aircraft – the highest priority aircraft at all times – to transport a critically ill patient from Orkney to Glasgow for further medical treatment. This was at the request of NHS Scotland, after the patient’s condition deteriorated to be life-threatening. At the time, my team were out working on another aircraft, so I called them back in to prepare the NS aircraft; within two hours we had it ready, well within the three hour window we had to deploy. It departed shortly afterwards with a critical care team onboard to look after the patient during the transfer. 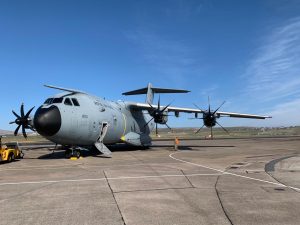 Getting ready for deployment on 4 April. Credit: RAF

Many other nations are also using their A400Ms to transport COVID-19 patients for essential care. The Luftwaffe (German Air Force) used an A400M to move French patients from Strasbourg in France to Ulm in Germany. Similarly, the Spanish Air Force used an A400M to evacuate a COVID-19 patient who was part of a Navy team that was en route to join the European Union’s mission to fight piracy in the Indian Ocean.

The A400M has also been vital for transporting cargo, including medical supplies and personal protective equipment (PPE). For example, 70 Squadron A400Ms have made several flights to Turkey to collect vital PPE. Even more impressively, they have just delivered a 2400 litre oxygen tank to the Falklands to enable the construction of an oxygen generation plant at King Edward Memorial Hospital in the capital, Stanley. 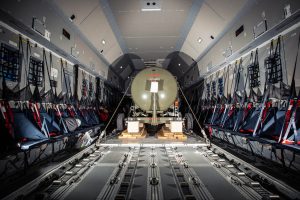 Other examples include:
• On 11 April, a Turkish Air Force A400M landed at Brize Norton to deliver 250,000 items of PPE to be distributed to the NHS.
• Airbus used one of their A400Ms to transfer hundreds of thousands of protective face masks from Toulouse in France to Getafe in Spain. 70% of those masks were then donated to the Spanish and French governments, with the remainder shared between Airbus sites in France and Spain.
• A Spanish A400M made a trip to bring medical supplies from China to Zaragoza Air Base in Spain.
• The RAF have been able to support St Helena in the South Atlantic by flying much needed medical supplies into Ascension Island for onward transfer by ship.

The RAF continue to be prepared to use the A400M to its full capability to support the nation and its allies by any means possible during the coronavirus crisis. 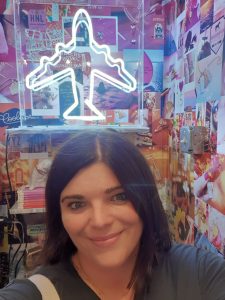