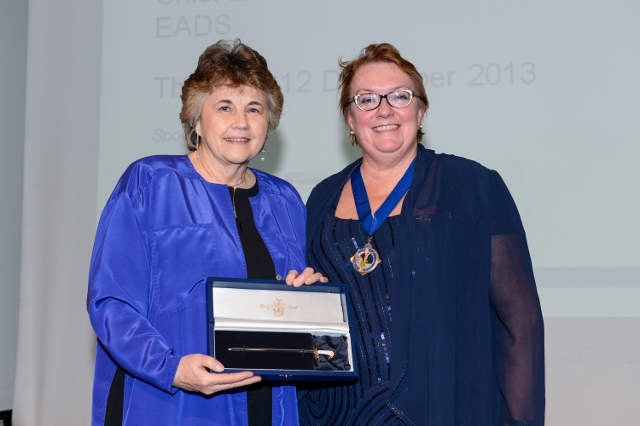 The original sword was donated by Graviner Ltd to the Society of Licensed Aircraft Engineers and Technologists in commemoration of a long association between the two organisations. When the Society of Licensed Aircraft Engineers and Technologists merged with the Royal Aeronautical Society in 1987 the sword became ‘the Presidential Sword’ which could be awarded at the discretion of the president in recognition of ‘outstanding service to the society’. Subsequently it was agreed that the sword would be known as the Sir Robert Hardingham Presidential Sword and that a miniature of the sword  – usable  as a paper knife – would be given to the recipient.

The selection of 2013 Recipient has been one of the easiest tasks I have had to do as President.

So let me introduce Clare Walker

She is a Companion of the Royal Aeronautical Society She was the Founding Chairman of the Society’s Women in Aviation and Aerospace Committee. She is an elected member of the Society’s Council. She also sits on the Society’s Membership Services Board.

The Women in Aviation and Aerospace Annual Conference has become a landmark in the Society’s Autumn Calendar and attracts both women and men from all aspects of our industry to present, participate and network. The Amy Johnson Llecture has become an equally significant event in the summer.

She has been the Society’s lead on a number of projects which bring together the professional institutions to work on improving diversity in engineering. She was key to the Society being one of the First Institutions to sign the Royal Academy of Engineering Concordat. She has represented the Society in a number of committees not least being giving evidence to a Parliamentary Select Committee.

In 2012, she was inducted into the Women 1st Top 100 Club of the most influential women in hospitality, passenger transport, travel and tourism. She also received the Jean Lennox Bird Award from the British Women Pilots’ Association for her services to aviation in 2010.

But this brings us to a personal note, I truly believe that without Clare’s hardwork, commitment and unstinting encouragement I would not have considered becoming President of the Society and ultimately be standing here.

So on my behalf but more importantly on behalf of the Society I am delighted to award the Sir Robert Hardingham Presidential Sword to Mrs Clare Walker.