Following on from a recent article looking back on the life of Naomi Christy, I wanted to share more of my findings on the life of this remarkable aviatrix.

“I met her when I was on a course at Bicester in the summer of 1980. Sitting in the briefing waiting for the mist to clear outside when a green Volkswagen Scirocco pulls up. An older woman jumps out, chats to someone, then hops into a Supermunk and scoots off to do an aircheck. Later that day she’s doing my aerotow check flights in a Blanik. After the third flight at around 1500 feet she says to me “I have control”. Side slips it down, leaving me in a ‘difficult’ position, hands control back to me and has a little laugh. I landed it safely though. As I went to get out her words were “Where do you think you are going young man?” as she climbed out herself. I realised I’d met a character.”

“My first encounter with her was typical. One early morning I was daily inspecting a glider when a little lady, who looked quite like my mother-in-law, jumped out of a very smart Volvo sports car, put on a flying helmet and climbed into our Tigermoth. “Give me a swing” she commanded and, astonished, I did so. She took off, did about ten minutes of aerobatics and landed. Thereafter she was always known as ‘The Colonel’ and she was a very good instructor and tug pilot, as well as a great organiser.” 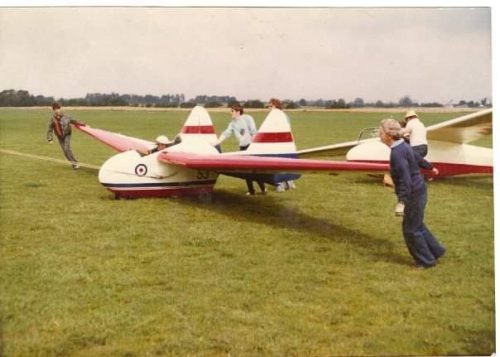 Not many people would dare to celebrate their 79th birthday in such an adventurous way as Naomi, who went wing walking on a Tigermoth at Cranfield Airfield. “Clearly I am addicted to being in the air, and standing on top of a wing instead of being in the cockpit will be another aerial experience for me before I reach the age of 80,” she said. This attracted the attention of local television crews and newspapers, who featured the story.

In her mid-80s Naomi was taken to Lasham Gliding Society for an afternoon out, where she had a flight in a glider “for old times’ sake”. She told the club to call the nursing home Matron to let them know she would be late coming back. The Matron asked “Is the Colonel having a nice time?” to which the club had to reply “We don’t know: she’s at 5,000ft!”. Sailplane and Gliding magazine published a request for glider pilots to write to Naomi in her nursing home to share their gliding stories with her, and many sent her letters and photos of their gliding adventures from around the world.

Naomi Christy and the BWPA

Naomi joined the BWPA in 1963, serving on the committee for a number of years before being appointed the Chairwoman in 1983. She retired from the Chairwoman role in 1988. In 1997 at the age of 85 she decided it was time to retire from her President role, with the then-Chairwoman Valerie Cahill noting in the 1997/1998 BWPA Gazette that “Naomi’s charmingly forthright personality has endeared her to us all and we will miss her involvement in the association”. Naomi handed over the role of President to Diana Britten.

The BWPA special personal achievement award, first awarded in 1994 to Connie Fricker, was renamed in 1997 in honour of Naomi’s commitment to the association. The award became known as the Naomi Christy Award. 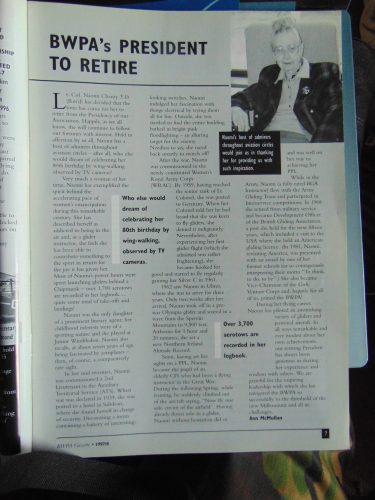 At her request, after she passed away in February 2001, Naomi’s ashes were scattered from a glider flying from Lasham Gliding Society – a wonderful way to celebrate a life lived to the full.

With thanks to the BWPA archivist Beverley Harrison, the British Gliding Association, Dr Nina Baker and RAFGSA members for taking the time to share invaluable information and personal anecdotes about Naomi Christy with me.