After winning the Naomi Christy Cup in 2020, I wanted to find out more about the lady it was named after.

Today, Tuesday 22 February 2022, marks the 21st anniversary of Naomi’s passing; a timely opportunity to look back on the life of a big character and successful female aviator.

Naomi was born on 28 October 1911 in Chignall St James, Essex, to parents Gerald Christy and Katherine Matthews. She also had an older brother, born in 1909, Hector Gerald Christy.

Growing up, Naomi’s hobbies included many outdoor activities and she excelled at sports, in particular hockey and tennis. In 1926, whilst at school in America, she and her tennis partner won the Connecticut Doubles Tennis Championship. She was also a keen and competitive squash player, and would later make it into the Daily Mirror sports section, after winning the Women’s Royal Army Corps (WRAC) squash rackets championship on her sixth attempt. 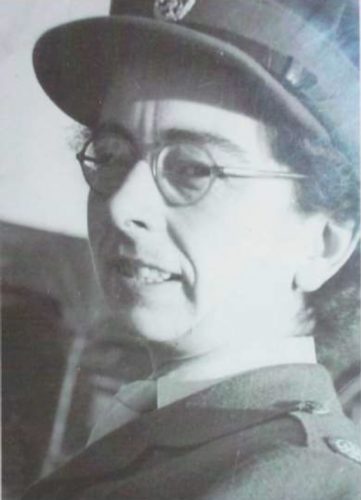 Joining the Territorial Army in 1938, Naomi was commissioned into the Auxiliary Territorial Service (ATS) in Essex as an adjutant. She served in the ATS during World War II, earning the rank of Senior Commander, and after the war held multiple roles in the War Office. The WRAC became a regular Corps in the British Army in 1949 and with this Naomi’s WRAC career began. She started as Officer Commanding the Officer Cadet Wing at the WRAC School of Instruction in Liphook, where she was selected to attend the first course at WRAC Staff College in 1951.

Her promotion to Lieutenant Colonel in 1959 came with a posting to Headquarters British Army of the Rhine in Rheindahlen. Lieutenant Colonel was the third highest rank available in the Women’s Army. This posting is what led to Naomi to take up gliding with the Phoenix Gliding Club at RAF Brüggen at the age of 50. In an interview for the feature ‘Feminine Focus’ in The Belfast Telegraph on Monday 4 March 1963, Naomi explains how she ended up learning to glide: “I’ve always been mad on horses, but there is no hunting in Germany so I did not take my horses when I was posted there. I decided to do something different. One day I remarked casually “I will take up gliding”. When a few days later a Colonel walked into my office and asked “Did you mean that?” I said “Good Lord. No” However he persuaded me to try and I loved it”. 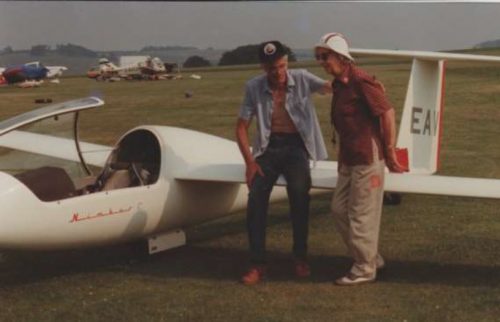 Naomi and her syndicate glider in 1989

She continued her gliding training and went on to become an instructor for the British Services Club, flying from Zell am See in the Austrian Alps. In September 1962 it was announced that Lieutenant Colonel Christy would be taking over the role of Assistant Director WRAC from Lieutenant Colonel Cynthia de Gris Martin at the Northern Ireland Headquarters. The move to Ireland did not put an end to her gliding career; as soon as she arrived, she joined the Red Hand Gliding Club at RAF Ballykelly. In October 1962 she broke the Northern Ireland gliding altitude record by over 4000 feet, reaching a height of 9500 feet.

In 1965, as part of the Army Gliding Team, she became the first woman to take part in the Inter-Services Regional Gliding Competition, hosted that year at RAF Bicester. Naomi also spent 20 years as a gliding instructor for the RAF Gliding and Soaring Association (RAFGSA).

A Private Pilot Licence (PPL) was an obvious development for her flying career and she soon gained her licence, declaring “I was old enough to have known better!” Most of her power flying hours were spent in a Chipmunk, her favourite aircraft, as an aerotow pilot. She is said to have recorded over 3700 aerotows in her logbook! 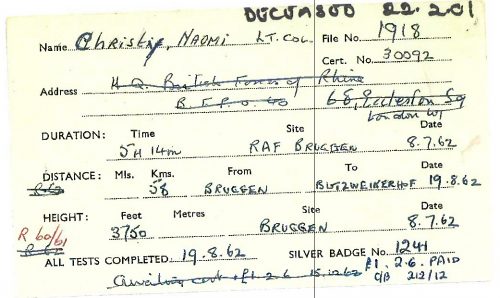 Naomi retired from military service in 1968 and became the Development Officer for the British Gliding Association, a role she held for 15 years. This role enabled her to visit the USA, where she gained an American gliding licence and visited international competitions such as the Mid-Atlantic Soaring Competition in Blairstown, New Jersey. Part of her role involved working with Department of Trade and Industry, Military and Air Traffic Operations and all military branches to negotiate the threat of air traffic and intensive power flying activities to gliding clubs. Her work and dedication to the cause helped gliding clubs gain funding from the Sports Council for site development.

Many glider pilots who gained badges in the late 1960s and 1970s will have had them signed off by Naomi, as she was the FAI Certificates Officer. She also carried out the accreditation that allowed pilots to make their own barograph designs and ensured they would be recognised for badge claims.

With thanks to the BWPA archivist Beverley Harrison, the British Gliding Association, Dr Nina Baker and RAFGSA members for taking the time to share invaluable information and personal anecdotes about Naomi Christy with me.