UK Pilot, Kirsty Cameron, has just completed a multiple record-breaking XC flight across the UK, on her R11. Kirsty’s flight is significant for several reasons, and will likely stand in the record books for some time to come. She reports:

I flew my Mantra R11 from Milk Hill in Wiltshire on Sunday 13th May and landed near Dereham in Norfolk, total straight line distance 233 km. It was the 2nd longest straight line distance flight ever flown in the UK – I was 20 km short of breaking the 253 km British record set last year by Richard Carter. I am one of only 3 pilots to ever log a valid flight of more than 200 km in the UK. The other 2 being Richard Carter and Kai Coleman, who flew 222 km the day before my flight. I also broke the British female record set just the day before by Helen Gant, who flew a brilliant 166 km, herself smashing Judy Leden’s long standing 125 km record set in 2004.

The flight was only my 2nd 100 km flight in the UK and was my 1st flight of more than 200 km anywhere. I smashed my previous personal best of 117 km from Piedrahita in Spain! The flight was very technical. I had to navigate around, above and under a lot of airspace, including that around Heathrow and Luton airports, flight lanes, military aerodromes and danger areas. 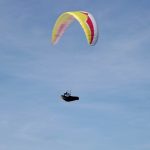 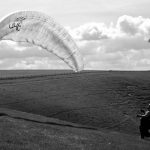 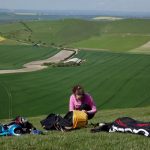 Anyone who has flown long distances in the UK is well familiar with the difficulties of dealing with airspace, which creates a complicated web of mandatory turns and ceilings. Kirsty’s line was far from simple, and highly impressive for many reasons! To view her tracklog, click here. copy below