On 13 February 2018 the Royal Aero Club announced that it had awarded Sacha Dench the 2017 Britannia Trophy (awarded to the British aviator or aviators accomplishing the most meritorious performance in aviation during the preceding year) for her Flight of the Swans, completed in December 2016. It was commented at the time that she was the first woman to achieve this since 1967, and the recipient, fifty years previously, was BWPA stalwart Sheila Scott, on her establishment of over 100 point-to-point international records.

We were particularly excited by the news as it emulated Sheila Scott further – Sacha was awarded the BWPA’s senior trophy, the Jean Lennox Bird Trophy in December 2017. The same trophy was awarded to Sheila Scott over 50 years earlier. A very different world…

Sacha Dench flew a paramotor to overcome the challenges of the terrain, to follow the long and wandering migration route of Bewick Swans heading west for winter from Siberia. Sacha Dench successfully completed her epic 7,000 km adventure, arriving in the UK on 5 December 2016, after flying through north western Europe from northern Siberia. She arrived in UK breaking a paramotor record across the English Channel. Her flight was made to raise awareness of the Bewick’s Swan, which is under threat. She did not fly directly with the swans, although she used the paramotor to locate the sites where they rested on their huge journey to UK. 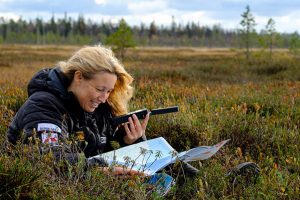 Sacha Dench is an Australian-born biologist. After studying biology at University College London, she worked on environmental projects. Around 15 years ago she moved into conservation and media production working for wildlife charities. She now works for Wildfowl and Wetlands Trust (WWT) in the UK and she trained to fly her paramotor in UK.

Congratulations, Sacha! We look forward to hearing about your next adventure.