On 11 April 2022, a group of twenty very excited BWPA members met up in the car park at Royal Air Force Brize Norton, in eager anticipation of a day-long visit to the base organised by BWPA Events Coordinator Tara Cawdell and Flight Lieutenant Matt Winwood.

There was a range of experience levels in the group including private and commercial licence holders, fixed wing and rotary pilots, brand new students and those with thousands of hours logged. However, everyone was equally thrilled to be there. 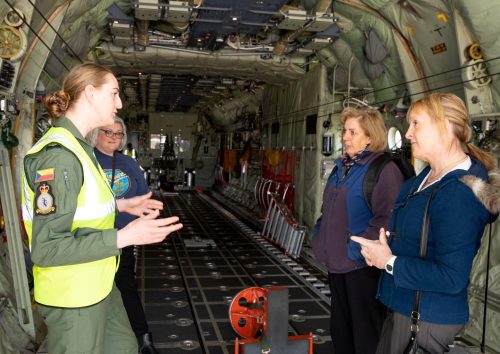 The BWPA visitors enjoying a tour

We were first introduced to several female pilots who fly the Hercules C130 and Airbus A400M from RAF Brize Norton, as well as loadmasters and engineers. They were, without fail, infectiously enthusiastic about both their individual roles and the teamwork behind every part of getting the job done.

Our group was then taken out to the apron and given a full tour of a Hercules C130, inside and out. Its capability, rugged design and adaptability were well explained and although I suspect most of us already had a soft spot for the aircraft, we came away with even more appreciation of its useful service.

After lunch in the Officers’ Mess, we were fortunate to have an inspiring talk from Station Commander Group Captain Emily Flynn about Operation Pitting, the military operation to evacuate British nationals and eligible Afghans from Kabul to the UK last August. It was humbling to see how proud she was of the personnel who carried out the arduous and dangerous task. Then came the hands-on experiences we were all so excited for! We were granted some time in the Dismounted Close Combat Trainer, in our case pistol shooting (firing a laser – not live rounds!). 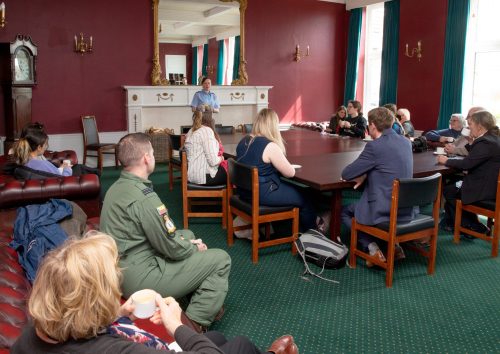 The group learning about the role of RAF Brize Norton

The final session of the day saw us getting to fly a Hercules C130. Well, a full motion sim anyway! We performed various sorties in groups, all using the heads up display, and everyone got to take control. The motion was realistic enough that one of our group had a slight mishap with the seat rails on take-off!

I could not possibly divulge exactly who from our group successfully landed the aircraft and who did not…. however, I can say that BWPA Chairwoman Sharon Nicholson landed perfectly. Of course!

This was yet another amazing experience brought to me through a love of aviation. I am so grateful, and my cheeks hurt from smiling and from telling everyone I know all about it, and I am sure everyone else who attended felt the same. 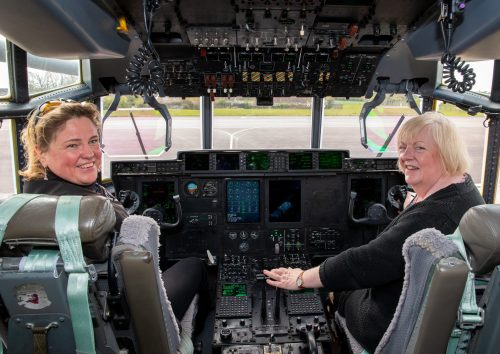 Enjoying the view from the cockpit