Preparation and maintenance of aircraft in long-term storage

COVID-19 has decimated the commercial aviation industry; passenger demand has dropped to near zero, with borders closing and travel restrictions now in place. This means the majority of airline fleets are currently not being flown, creating financial implications associated with how and where to store aircraft, and questions about whether it is economically viable to park or store certain aircraft types. 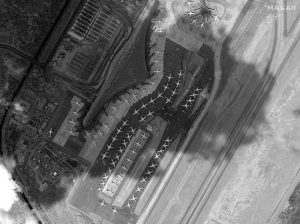 First, it must be decided if an aircraft is going to be parked up or put into long-term storage, as the maintenance requirements for each are different.

‘Active parking’ is where the aircraft is still ready to fly and provides a cheaper, short-term solution. Check sheets detail maintenance tasks to be carried out at set intervals such as 7, 15 and 30 days to keep the aircraft airworthy. The tasks vary from quick, simple walk rounds, reactivating systems and running the engines for approximately 15 minutes to power everything up, charge the batteries and allow fluids to circulate. The aircraft will need to be moved at least a quarter of a wheel turn or towed a short distance to prevent flat spots forming on the tyres; the frequency for this is specified in the maintenance manual. A set of blanks are fitted to the pitot tubes, static vents, temperature sensors and angle of attack sensors. Additionally, for periods longer than a couple of weeks, engines also have covers fitted. Outflow and fan exhaust valves are electrically or mechanically closed and any other apertures fitted with blanks or covered. These prevent moisture and dust ingress, bugs getting into system lines and birds from nesting. Aircraft must have the wheels chocked, propeller slings fitted if required and preferably be parked facing into wind, the latter being especially important if adverse weather is forecast. 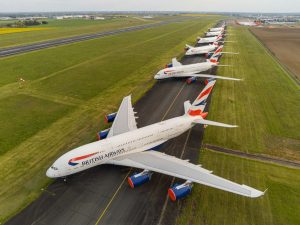 Long-term storage is the option currently being selected by many airlines, especially for older generations of aircraft. Many of these are unlikely to return to service again. Some airlines have already decided to retire aircraft from their fleets permanently: Virgin have retired the A340-600s early, Delta have retired MD-80s, and KLM and Qantas have retired their 747-400s. Aircraft put into long-term storage can be left for up to two years before they need to be made airworthy again; the associated costs are much higher though.

The ideal place to put an aircraft for short-term parking or long-term storage is a hangar, however this is impractical for airline operations and even for many general aviation clubs. Many of the aircraft unlikely to return to service have been flown into ‘boneyards’ for long term storage and potentially scrapping. Examples of such locations include: Kemble (UK), Teruel (Spain), Châteauroux (France), Alice Springs (Australia) and multiple sites in the Mojave Desert (USA). Weather is a consideration when selecting a long-term storage location, with places such as the Mojave Desert being preferable as the hot, dry weather prevents corrosion and moisture ingress. Cold temperatures can lead to degradation of tyres over time so such climates are not suitable. 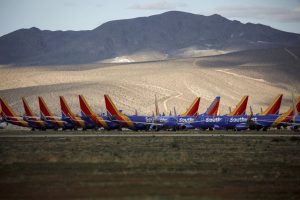 Southwest 737s parked up at Victorville, California. These 106 aircraft account for approximately 15% of their fleet. Credit: Patrick T Fallon (Bloomberg)

The processes for putting an aircraft into long-term storage are specified in the aircraft and engine manufacturer maintenance manuals. When it is decided that an aircraft is to be stored long term, desiccant bags and humidity indicators are fitted in the engines at the inlets and exhausts. Oils are drained and replaced with inhibition fluid, which has an antioxidant to prevent corrosion and is a higher viscosity to stop it from settling at the bottom of the system. Some engines require the spools to be turned during long-term storage at intervals of 45-90 days; the TP400 requires the low-pressure spool to be turned manually every 45 days if the aircraft is stored outside. To prevent the growth of bacteria and fungi within the fuel tanks, fuel is regularly tested for the presence of water; this is generally done as part of a weekly inspection. Over time, fuel can degrade so the checks are necessary to ensure that the fuel is usable for when the time comes to run the engines again. 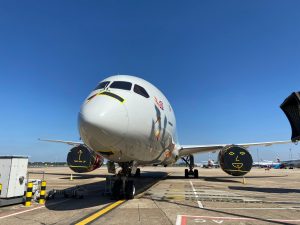 Depending on where and when the aircraft is stored, it may be necessary for the landing gear to be covered to prevent birds from nesting. All of the switches on the flight deck are selected to ‘off’ and then the aircraft battery is disconnected to prevent it from draining. Lever locks are fitted to the control columns or side sticks to prevent inadvertent movement of the flight controls. Flight deck and passenger windows are covered with sun visors or opaque sheeting to prevent UV damage to the interior, passenger seats are also covered to try and keep them fresh. During storage, it is necessary to open the aircraft doors regularly to air the cabin out and prevent unpleasant smells forming. 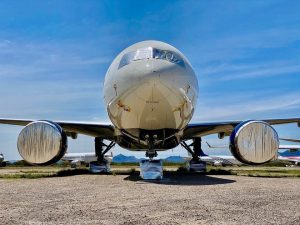 Once the period of downtime is over, the maintenance manuals will detail the necessary tasks to be carried out to make the aircraft airworthy again. Systems will need reactivating and testing to confirm correct functionality. Landing gear and flying controls will require lubrication prior to flight to ensure the joints have not dried out or become contaminated. After all the blanks and covers have been removed, a series of checks will be carried out to ensure no loose articles or bird nests are present.  Independent checks to confirm all blanks have actually been removed will also be necessary. A series of engine ground runs will have to be carried out once the inhibited oil has been removed from the oil system.

While lockdown measures are gradually being eased, many countries continue to limit cross-border movements and it is anticipated this will continue for some time. Bringing aircraft back into service will be a staggered process; however demand for flights will not recover for quite some time. 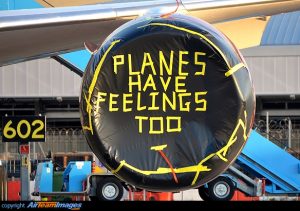