Not just hot air – a journey into ballooning

“But you don’t actually fly a balloon do you? I mean, you can’t really…can you?” This was once the question posed to me by a fixed wing pilot on discovering that I had recently gained my private balloon licence. Not questioning my licence, but questioning whether a balloon could actually be flown!

So how did I, as a fellow fixed wing and Airbus-as-a-day-job pilot (I believe I am one of only two women in the UK to hold a commercial aircraft licence and a private balloon licence), get involved in balloons?

I had always liked the look of balloons. Sometimes in the summer they would come over the house, having taken off from a nearby country pile; or on the climb out of Gatwick we would see them early morning, floating over Kent. But I had no idea how to get involved and early tentative enquiries had come back with “well you’d need your own balloon”, so I had pretty much written it off as a nonstarter. Fast forward some years and I spied an article in the BWPA Gazette (of course!) about a women balloonists’ meet that was happening in the Cotswolds later that year, and extending the invitation to fixed wing and rotary pilots to come along. So, I did!

I had no idea what to expect – an ‘interloper’ turning up to the meet – but I could not have received a warmer welcome. Ballooning, it seems, is a sociable, if sometimes frustrating sport. The weather did not play ball that weekend (doesn’t it often in aviation!) but I got involved in competitions such as which team could rig up the ‘bottom end’ of their balloon quickest. This involved assembling the poles on the basket to support the burner frame, connecting the burner to the propane cylinders and finally giving the burner a blast; the flame signifying that we were finished. The weather meant we spent a fair amount of time in the pub (every cloud…), but I went away with plenty of contacts and information on ballooning. 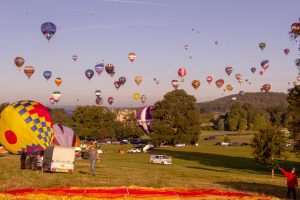 The next year the meet was in Wales. I went along again and this time we were blessed with flyable weather. I managed to get a couple of balloon flights (thank you to two lady balloonists) and finally experienced floating over the countryside. I even got a chance to have a go at flying; taking charge of the burner. (Yes, Mr Fixed Wing, you see you do actually fly a balloon, not the other way round!) Taking off from Powis Castle was simply amazing…both the location and the sight of many hot air balloons gradually filling up and coming to life, standing up, ready to launch. I discovered that balloons do tend to draw the crowds but that not all landowners wholeheartedly welcome them.

I blame (in the nicest way!) fellow BWPA member Alllie Dunnington for getting me started in ballooning, as from meeting her at the Wales gathering, I decided that yes, I would learn to fly hot air balloons. It has taken me a while, (the vagaries of the British weather and giving birth to my daughter!) But finally, a couple of years ago, my licence was issued. Along the way I have been on ballooning holidays in Portugal and Germany, and joined various meets in the UK, France and Italy. The meets are particularly good as they are usually from interesting sites, you get to see a fair few special shape balloons (giant Minion or penguin anyone?) and of course you meet plenty of ‘balloon people’. The French biennial meet, known by its nickname of ‘Metz’, draws several hundred balloons, which looks pretty impressive when they are all inflated, bobbing around ready for the mass ascent. Now all I have to do, after COVID and a very wet month of May, is get current again… 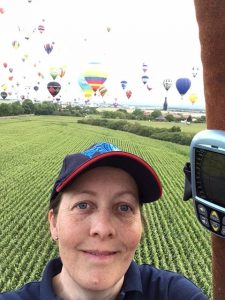 Amongst a sky of balloons at ‘Metz’ in France.