“Sure am,” I said, glancing sideways at Harry, my thirty-something flying instructor whose mother, I discovered, was a former British Airways stewardess just like me. Snug in the aircraft’s sunlit cockpit, Harry looked the part in smart black trousers and pressed, white shirt complete with epaulettes and two gold stripes.

I wriggled to get comfortable in the left-hand seat of the single-prop, blue and white Piper Warrior aircraft registration G-BRBD. I could have done with a cushion to lift me up a bit. Shouldn’t I be able to see above the panel of dials, gauges and switches? I didn’t dare say anything though. I extended my legs forward into the footwell to ensure my feet, with heels to the floor, could rest lightly on the rudder pedals and toe brakes. With a metallic snap of waist and shoulder buckles, I secured my seat harness. I slid the cumbersome headphones and attached boom microphone over my head and ears. Silence. I hadn’t plugged them into the console. I blushed at my ineptitude and winced too at the pain from the backs of my stud earrings now sticking into my neck.

Apart from that, it was as near perfect a day could be for flying at around 2,500 feet or so above the Dorset countryside. There were a few wisps of cloud above us, but Harry said they would be unlikely to interfere with our plans for the next hour. He also explained that I would be learning to fly a light aircraft under visual flight rules, which means flying in weather conditions clear enough to allow the pilot to see where she or he is going without the use of any mechanical aids. I wasn’t sure if this was a good thing or not.

“Compton Radio, this is Golf Bravo Romeo Bravo Delta. Request radio check and airfield information.” That was Harry speaking, not me. I didn’t have a clue what to say.

The aircraft’s radio crackled in response. I recognised Emma’s voice from the Operations Room, as she provided us with the latest wind speed, direction and air pressure before confirming we were OK to taxi. With our checks complete, Harry eased the throttle forward and applied a little pressure to the right rudder pedal – I knew this because of the dual controls. The concrete apron on which we had been parked slipped away from behind us and I glanced across at the aerodrome café to see if any of my family were waving.

Taxying along the firm, but slightly bumpy, grass airfield towards the runway, I couldn’t help thinking that the sound coming from our aircraft’s single engine sounded more akin to a sit-on lawnmower as opposed to something powerful enough to help lift us up into the air. On the way, we passed a motley collection of other aircraft such as a Tiger Moth, Harvard warbird, two or three microlights and a Squirrel helicopter. Such fabulous names. 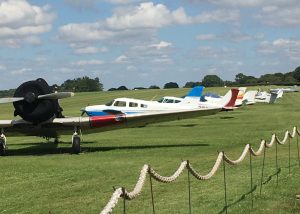 Conversation with Harry was limited as I let him focus on what he was doing. I had numerous unanswered questions in my head and tried to select the most sensible ones to ask. Then, with some more checks completed we turned onto the runway. Harry explained that it was runway two six right, meaning we would be taking off at 260 degrees (almost due west) before making a right turn in the air. As instructed, I kept a light touch on the aircraft’s dual control column to follow through on Harry’s hand movements. He moved the throttle to put full power to the engines and we began our take-off roll. It didn’t take long to gain enough speed to get airborne, and then up we climbed to 200 feet, 500 feet then 1,000 feet and beyond, high above the ancient, rolling landscape of the Cranborne Chase.

After decades of dreaming, and numerous hours of flying as cabin crew and passenger, I was, at last, learning to fly. This was going to be the best journey of all.