BWPA members featured heavily at this year’s awards ceremony for the 2019-2020 Dawn to Dusk competition. The competition, now in its 58th year, has been running since 1964, and the awards were presented by Pooleys at the RAF Club in London on 17 September.

Members Fiona and Angus Macaskill won the first place Duke of Edinburgh Trophy for a flight which also saw them achieve a Guinness World Record – most airfields visited in 12 hours by a fixed wing aircraft. Sharlene Benn won the third place Tiger Club Trophy for her Save the Children Flight and Amy Whitewick won the Bonney Trophy for her Magenta Pigeon flight.

We talked to some of the victors about their Dawn to Dusk experience. 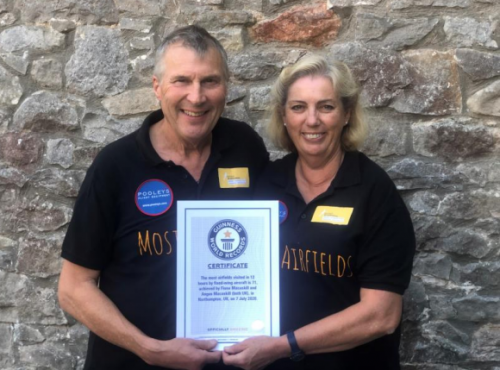 Fiona and Angus achieved their record-breaking feat in July 2020, and for Fiona it was literally a dream come true.

“As a child, my favourite Christmas present was always a copy of the latest Guinness World Records annual. I spent hours poring over it, reading about people who had done extraordinary things. I dreamt that one day I would be in that magical book,” explains Fiona.

After deciding with her husband, Angus, that the Dawn to Dusk competition would be a fun challenge to take on, the planning began. The couple also decided to use the challenge as an opportunity to raise funds for The Air Ambulance Service.

Planning the route was far from easy. “I started by looking at maps to find where there was a high density of airfields. Guinness only allow airfields longer than 300 m and ones that were marked on an official map. Our Bolkow Monsun can’t land on an airfield shorter than 400 m so the length constraint was not a limitation,” recalls Fiona. 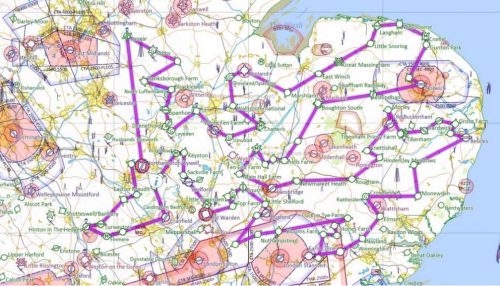 “I adjusted and re-drew the route 19 times and wrote many emails to airfields, but we got there in the end!”

12 hours, 71 airfields, one Guinness World Record later, and nearly £2,500 raised for a very worthy cause; what is next for Fiona and Angus?

“Now we have succeeded in getting the 12-hour record we would like to have a go at the 24-hour record. We will have to beat the current record of 92 airfields in 24 hours: this was achieved in the United States by an American in 2019. It would be good for the record to be beaten in the UK, preferably by us … But we will see about that!”

One woman, a Cessna, and her pigeon 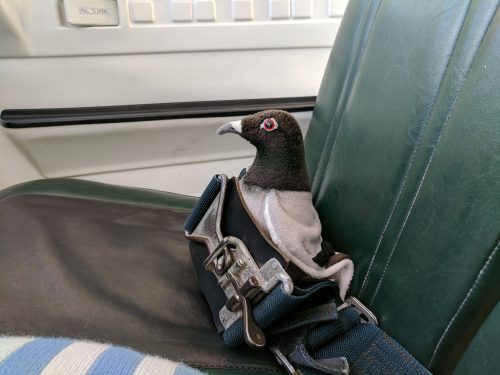 Only a year after completing her Private Pilot Licence (PPL), Amy Whitewick entered the competition for the first time and won the Bonney Trophy for her flight, based around the theme of racing pigeons. Supported by Reggie the pigeon mascot, Amy flew a distinct flight pattern.

“The theme I chose was ‘racing pigeons’ as my grandfather and grandmother both kept beautiful, award-winning birds, one of which, called Pauline, amazingly went to Spain and back eight times in her lifetime. I wanted to fly in loving memory of my grandparents and picked out three routes to fly to represent three birds. I realised GPS drawings had never been entered into the competition and this spurred me on to enter, to show something entirely new and different. A friend on Facebook made fun of my plans and jokingly suggested I should try flying a Picasso picture – the Dove of Peace. He was very shocked when I flew it and sent back the completed GPS image a few days later with a big grin!”

This was Amy’s first Dawn to Dusk competition and she is already planning her next entry. To anyone thinking of entering this or a similar competition in the future? Amy says, “Just do it!”

Entries for next year’s competition are now open.

Thanks to Flyer for their permission to use the main image.