My first landing in a jet

Just last week was a day I had imagined for many years of my life and a day I know will stay with me for many years to come. It marked the first flight of a job I am incredibly passionate about and it was a realisation that the hard work that I had put into my flight training up to that point had paid off. In addition, I never thought I would be fortunate enough to be able to do this in the Dassault Falcon 20, an old but beautiful jet.

I obtained my Private Pilot’s Licence (PPL) in 2017 before following the modular route for my commercial flight training. I worked an office job alongside studying for the ground school exams, which took me just over 15 months to complete. In 2019 I completed my Commercial Pilot’s Licence (CPL) and Multi-Engine Instrument Rating (ME/IR) at Bournemouth Commercial Flight Training, with the kind support of the BWPA through their Flying High Scholarship. I remember the feeling when my examiner shook my hand at the end of my ME/IR test and told me I had passed; however, I knew there was still a long way to go to be able to sit in the right hand seat of a jet.

Completing a Type Rating to be able to fly the Falcon 20 with just under 300 hours flight time under my belt was challenging. Aside from commercial flight training, many of my hours had been in a single seat, open cockpit biplane and I was pleased that the Falcon 20 still had that ‘steam driven’ feel to it, as opposed to the all-glass later models. Having no previous multi-crew or jet experience, there was a huge amount to learn during the course. There were many times where I questioned whether I would be able to complete it; however, it was an incredible feeling seeing it come together for the final skills test.

Base training marks the final part of the Type Rating and includes a minimum of six take-offs and landings. On 4 January I flew the transit to Newquay Airport, where I completed the training, and what a feeling it was! The jet flies better than anything I had imagined, and I desperately tried to contain my excitement as I made sure I remembered my calls and actions during the take-off. That post-flight smile did not leave my face for days.

Whichever route you take, flight training is expensive. I couldn’t have done it without the support both from family and organisations such as the BWPA. Training and being assessed as a pilot continues throughout your career; however, if there is anything I can take away from what I have done up to now it is that if you want something enough then keep going until you have achieved it. Three years ago there were times when I didn’t think I would ever pass my General Navigation PPL ground school exam, but hard work pays off and I am forever grateful to those who helped me make my flying dream a reality. 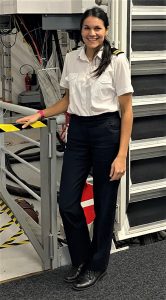