Adventure and aviation in Saudi Arabia

There I am: a woman on her own, sitting in a car, driving through this vast rugged, mountainous scenery. Nothing particularly special you might think. Except that this is not somewhere in the US or Africa – I am in the middle of Saudi Arabia, a country where only two years ago women were not allowed to touch a steering wheel or travel without a male minder.

Times are changing though – I am lucky to be one of the first tourists to enjoy a new freedom of movement in Saudi Arabia, but even better, to pilot a hot air balloon over one of the world’s most secret and amazing historical sites. My husband Phil and I are here amongst over 200 fellow balloonists by invitation of Rien Jurg Promotions, the Saudi Commission for Tourism and National Heritage and the Royal Commission of AlUla (RCU) which has big plans to attract visitors from around the globe. Despite taking nearly three days to get here, it was well worth the long journey!

Al-‘Ula (Mada’in Saleh) is a UNESCO world heritage site in western Saudi with hundreds of rock-carved tombs, similar to Petra in neighbouring Jordan. The Nabateans extended their kingdom from Petra to this area around 2000 years ago and buried their most respected military and civilian citizens in temple-like tombs. Lost to the outside world for many years due to the restrictions on tourism in Saudi Arabia, Mada’in Saleh was only announced as a UNESCO world heritage site in 2008 and is now heavily promoted by the RCU. 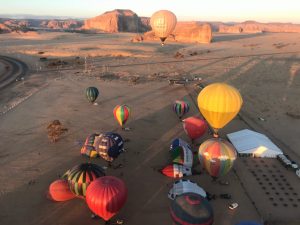 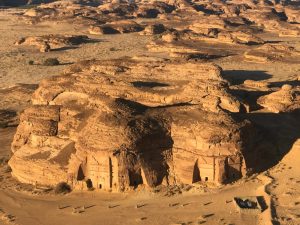 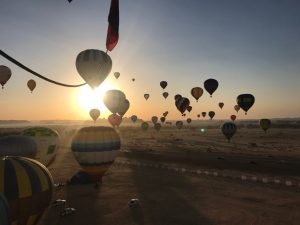 As 100 balloons take to the skies in the gin-clear but freezing cold morning hours, Phil and I take part in the mass launch in our red-gold Cameron C-100 with two local guests on board. We can hardly believe our eyes: as far as the horizon stretches there are bizarrely shaped rocks, table and spiky pinnacles displaying a light-show with their reflections between shade and bright sunshine. It gets even better as the entire balloon fleet gently drifts towards the tombs of Mada’in Saleh – we come within metres to catch a rare bird’s-eye view of the massive yet intricately carved tombs.

Winds are gentle with only 3 kt at the surface but climbing to higher altitudes (we are launching already from 3000 ft AMSL) we find a very useful faster box wind to allow us to fly back to base. After ninety minutes we land our ‘Stairway to Heaven’ in the soft sands near the main road. With our driver and the crew chief on the spot to help with deflating, we are one of the first back to base to refuel. Not too long after, we are all sitting in our dining tent enjoying a delicious breakfast buffet with fresh salads, cooked hot Arabian dishes like ‘foules’, and fruit. 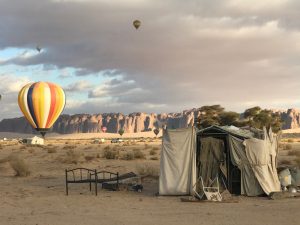 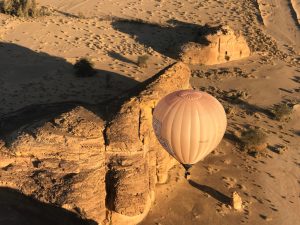 After five unforgettable flights in our logbooks and country number 126 for Phil and 102 for myself, it was time to go back to Al Ula airport. But not before grabbing the opportunity to hitch a ride in one extremely rare vintage aircraft: a 1942-built Stinson Gullwing. Rob Macdonald, a British expat living in Bali, takes us over the main highlights of the area, flying a close circuit over famous Elephant Rock, before climbing over a mountain range to show us the Maraya concert hall. This massive glass construction that reflects the surrounding rocks and mountains features concerts with artists such as Andrea Bocelli, Yanni, Lionel Richie and Omar Khairat. 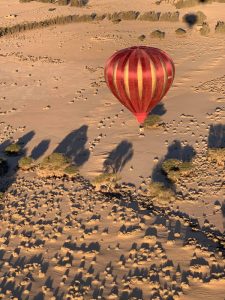 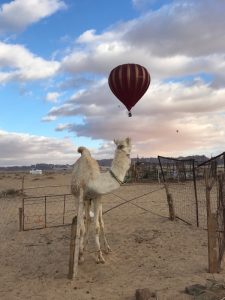 Returning to base we spot the private jet of the Japanese prime minister flanked by two big jets of the Saudi King. We also admire the sister to our own aircraft, a Beech D18S (G-BKGL) and a beautiful Stearman Kaydet (G-CIOC). The four vintage aircraft have flown all the way from the UK just for this special event, offering scenic rides over this fascinating landscape.

With heavy rains and serious flooding in Dubai on our return, many of us got stranded for days without our luggage. But by then we all have learnt one important Arab word: ‘Insh’allah!’ Nothing ever quite went according to plan, but for sure we all have new tales to tell and it was an unforgettable, amazing experience! 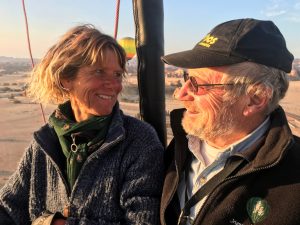